A Bright Whisp, a Glistening Wind

A Master of the German Art Informel

Bernard Schultze (born in Schneidemühl / Pomerania, lived and worked in Cologne until his death in 2005) would have turned 100 on 31 May 2015. With this major birthday homage we celebrate one of the most important artists of the post-war era and present his varied work. He was a co-founder of the »Quadriga« artist group (1952) with K. O. Götz, Heinz Kreutz, and Otto Greis. They established Art Informel as a premier art movement of the post-war era in Germany. Schultze rejected realistic figuration or »formulaic« geometric abstraction. He drew on intuitive creative power, worked associatively, and followed, like Jean Arp, the laws of chance. During the current year devoted to the theme of »open spaces«, the Arp Museum Bahnhof Rolandseck puts »informal art« as an artistic free zone centre stage. In addition to delicately coloured and black-and-white drawings as well as intensely colourful large-scale oil paintings Schultze's reliefs and some of his early sculptures – particularly the oil paint-treated »Migofs« – provide evidence of the transformation of his paintings into sculptural objects that expand into space.

From 4 January to 13 February 2016 the museum will be closed for renovation. 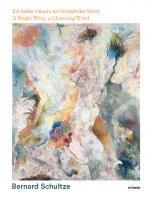